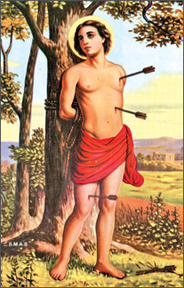 Saint Sebastian was born at Narbonne, in Gaul, but his parents were of Milan, in Italy. He was educated in Milan. He was an offer of the Roman army, caption of the guard and a favorite of the emperor Diocletian.

Diocletian did not like Christians. He persecuted the Christians, Sebastian visited them in prison, bringing supplies and comfort and saving them. He healed the wife of a soldier by making the sign of the Cross over her.

As Sebastian was a Christian and proclaiming boldly about Christ, he was tied to a tree, shot with arrows, and left for head. But he was brought back to life with the help of St. Irene of Rome. As he returned to preach to Diocletian, the emperor clubbed him to death in the year 288 AD.

He is a well known martyr in the Roman Catholic Church. All Kinds of people look to saint Sebastian in the hope of attaining strength and endurance. Saint Sebastian’s appeal is universal. When the world that often overwhelms us, Catholics look to him in hopes of sharing in the vitality that made him steadfast in life and faith. He is a patron for soldiers, plague-stricken, archers, athletes and holy Christian death. He is also patron of our school. His feast day is celebrated on 20th of January.

May almighty God bless our school management, staff, students and their families through the powerful intercession of Saint Sebastian.